CURRENTLY OUT OF STOCK. Please contact us to be notified when they are back in stock 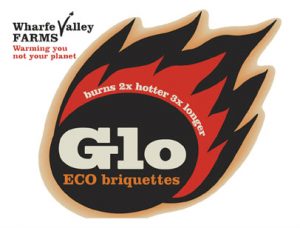 Glo Eco Briquettes are a carbon neutral fuel for stoves and open fires. The CO2 released in burning has only been absorbed by the growing rape crop within the last 9-12 months. VO2 from coal was captured millions of years ago and CO2 from wood and timber was absorbed up to 100 years ago. When these material burn, they release the COs back into the environment.

Glo Eco Briquettes only use the rapemeal from our own waste material produced from the oil extraction process. It hasn’t been transported around the world, using up precious fossil fuels.

Glo Eco Briquettes for stoves have an energy value of 22/24MJ/kg, twice the energy of logs and these briquettes burn twice as hot and three times longer than logs and coal.

We also have a large selection of Glass Hearths, Sandstone Hearths and Limestone hearths available for stoves.

This website uses cookies to improve your experience while you navigate through the website. Out of these, the cookies that are categorized as necessary are stored on your browser as they are essential for the working of basic functionalities of the website. We also use third-party cookies that help us analyze and understand how you use this website. These cookies will be stored in your browser only with your consent. You also have the option to opt-out of these cookies. But opting out of some of these cookies may affect your browsing experience.
Necessary Always Enabled

Any cookies that may not be particularly necessary for the website to function and is used specifically to collect user personal data via analytics, ads, other embedded contents are termed as non-necessary cookies. It is mandatory to procure user consent prior to running these cookies on your website.