Moss & Moor’s Head Chef Kevin Gratton’s House Dressing recipe is ‘simplicity itself’ and has become a regular request from the venue’s restaurant customers and Food Hall shoppers, on a daily basis.

Kevin was back in Wharfe Valley this week, for the second phase of bottling for his House Dressing. First batch produced in February of this year, and because it has become so popular, second run completed.

“Not only have I been a fan of Wharfe Valley’s products for some time, but we were impressed with their ability to contract bottle in small batches,  as it enables us to test sales in small quantities within our own Food Hall – which has become a destination shop for ‘discerning foodies’ “.

Third generation farmers, Wharfe Valley sow, grow, harvest and press  their rapeseed – ‘it’s a labour of love’ for Geoff and Sallyann Kilby, and their team, and developing  part of the operation into a contract bottling service  is attracting a growing variety of customers and brands to this service – catering for small or large runs. 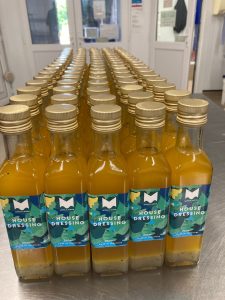 About the Author: Hayley